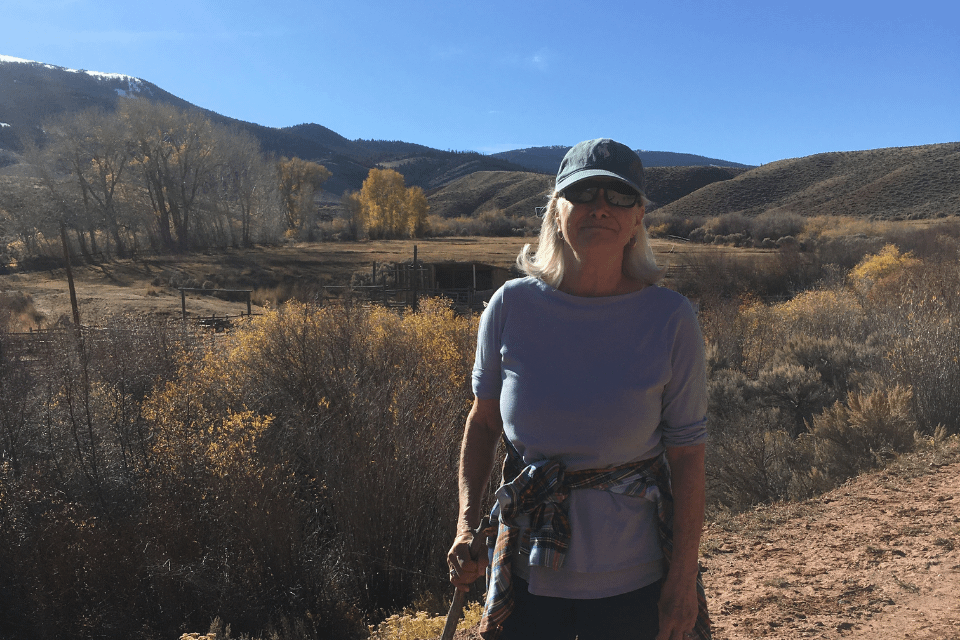 “Oh, I forgot my gloves,” said Sue Harbison, halfway up the steep hike to the overlook. “My memory is so bad!”

Indeed her memory is bad for the simple matters such as which day it is now, or whether she has paid you back for that book yet, or whether she shared that bottle of wine with friends (most likely) or just forgot where it is.

But as to the matters that truly matter, her memory is extraordinarily rich. Like the view of the Tetons from her father’s private plane (“I like them even better than the Alps,” she says). Or collecting Native American artifacts with her childhood friends in Arkansas on what they always called “the dusty trail”. Or the shopping trips and Broadway shows with her parents during her father’s business trips to headquarters in New York. Or the cats stalking the top of the walls around that restaurant in Bombay with an open roof, or the one with the delicious food hidden away on a second floor somewhere in Bordeaux.

At age 70, and a former schoolteacher, Sue is very fit, vivacious, and articulate. Her failing memory for the otherwise unmemorable matters is the reason why she can now be found at Warm Valley Lodge, the assisted living facility in Dubois.

“This is a lovely place to live,” she says. “We have a great library here. People are active, and everybody I meet here has an interesting story. I like being around people who are older and wiser than I am. Maybe it’s because I worked with kids for so long.”

During Sue’s childhood, because of her father’s job as an oil-company executive, the family bounced back and forth between Houston and a small town in Arkansas. To curtail the constant relocations, he accepted an offer to move the family to Delhi, where Sue and her sister went to English-speaking schools.

“I had a different life than most,” she says simply. Sue normally doesn’t talk about her past, because she has found that some people think she’s just bragging. But prompting always leads to one fascinating recollection or another, like the fact that she didn’t enjoy visiting Germany because her father had been a POW there, having been a fighter pilot during World War II.

After leaving India, when Sue left for college, her father was transferred to Casper, and the family discovered Wyoming. As a young mother, she worked as a schoolteacher in Texas, near the Mexican border. She became fluent in Spanish, and—the memory she evokes most often—she was allowed to nurse her baby there. That was the job requirement she was not going to relax, she says.

Until recently, with her children grown and her marriage ended, Sue has lived in Tulsa, where she kept teaching, and enjoyed the college atmosphere, the theaters, and the art museums.

Her daughter Addie Deupree, who teaches at the Teton Science School in Jackson, says it was difficult to persuade Sue to leave Tulsa. “It’s tough to put down new roots at her age. And she didn’t want to go into a nursing home.” But with a daughter in Jackson and a son living in a village in the Alps above Montreux, Switzerland (and grandchildren Sue is very eager to see again in person, not on Facetime), her failing memory for small daily details led to a difficult decision.

In Warm Valley Lodge in Dubois, they did not choose a nursing home, in fact, but a level 1 assisted living facility where people who can mostly take care of themselves get help with tasks like house cleaning and remembering medications. It also offers assistance to people rehabilitating after injuries or surgery.“I was not looking forward to it beforehand,” Sue admits. “I was not happy to give up my home and my car. I thought: An old folks’ home? But this is fabulous.”

Sue has busied herself making new friends and decorating her small apartment with memorabilia. She seems always to be helpful in the Lodge, serving others their wine during Friday Happy Hour or holding the door for someone returning with their walker after some time outside near the river.

Keeping fit is paramount for Sue. She likes to say she has worn a groove in the river walk over to Pete’s Pond and back. Often, she joins naturalist Duane Howe on his strenuous hikes uphill to the badlands across the road from Warm Valley Lodge. On other days, a volunteer enjoys Sue’s company on hikes elsewhere in the surrounding mountain valley. She’s a great conversation partner, who always appreciates the health benefits and the rewarding views.

“It was a tough transition,” says daughter Addie. “We wondered whether we were making the right decision. But when we found Warm Valley Lodge, I knew we had found the right place. She seems so happy there. Thrilled.”