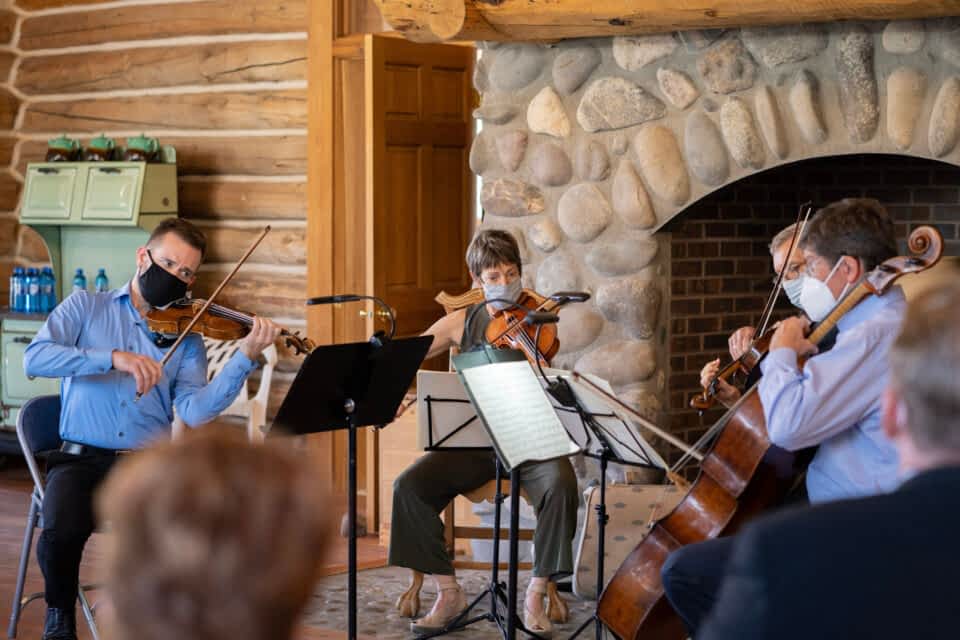 This pandemic, which seems endless, has come at the cost of silence for two very different groups: musical performers and people isolated in long-term care. Recently, a few of them joined briefly to share an experience that goes beyond words–a sense of jubilance at the simple act of enjoying music in the same physical space again, at long last.

The quartet of world-class musicians from around North America, brought to Wyoming by Jackson Hole Chamber Music, was rehearsing before its first performance of the 2021 season, a Sunday-afternoon concert in Dubois. The audience at the dress rehearsal were residents of Warm Valley Lodge, the assisted living facility in Dubois. They listened and watched from a distance of more than 6 feet, everyone duly masked but also, by their own words, astonished and impressed by the performance.

The rehearsal and concert took place at the historic Dennison Lodge in Dubois. Even with a steady breeze and doors and windows open for ventilation on a beautiful Sunday afternoon, it might have been too risky for the Warm Valley Lodge residents to join the audience at the 3 p.m. performance. So the organizers arranged for them to attend the dress rehearsal instead.

That afternoon, violinist Jennifer Ross spoke poignantly about the joy of being able finally to break the silence of the past two years and perform again with professional colleagues before a live audience. As she put it, the quartet was not performing for the people listening; it was enjoying the music with them.

At the rehearsal, it was obvious why people describe the act of performing music as “playing.” From their vantage point, the Warm Valley Lodge residents could easily see the delight on the musicians’ faces as they concentrated on the energetic and joyful strains of the Mendelssohn String Quartet in D, and their intensity as they followed the passages of Schubert’s lyrical one-movement Quartetssatz, which the program notes described as a piece that “moves us to hope, even in the midst of perilous times.”

It was a rare opportunity to witness some of the best of classical-music performers as they prepared for a performance. They could easily see members of the quartet glancing back and forth between the music and each other, nodding with signals of tempos, and leaning into the most beautiful musical phrases. They heard violist David Harding politely ask to begin again, in order to perfect a certain passage. They watched as Ross asked to reconsider a spot where the quartet was failing to pick up the tempo quickly enough after a pause.

Asked afterwards about the experience, Warm Valley Lodge residents responded with unbridled enthusiasm. Nancy Steeper, who has enjoyed classical music since college, remarked about the “extraordinary talent of the performers.”

Charlie Edwards, who said he knew “almost nothing” about classical music and “rarely or never” attends concerts, said he enjoyed the concert more than had expected, particularly the “coordination of the musicians” as they played together. Like everyone, he added that he would like to attend again if the concert was repeated next year.

What did they like least about the experience? “Didn’t have a least!” said Sue Harbison (and neither did anyone else).

The concert was made possible by generous grants from the Never Sweat Recreation Board, the Opportunity Shop Foundation, the Adeline Ross Foundation, and the Wyoming Cultural Trust Fund, a program of the department of State Parks and Cultural Resources.